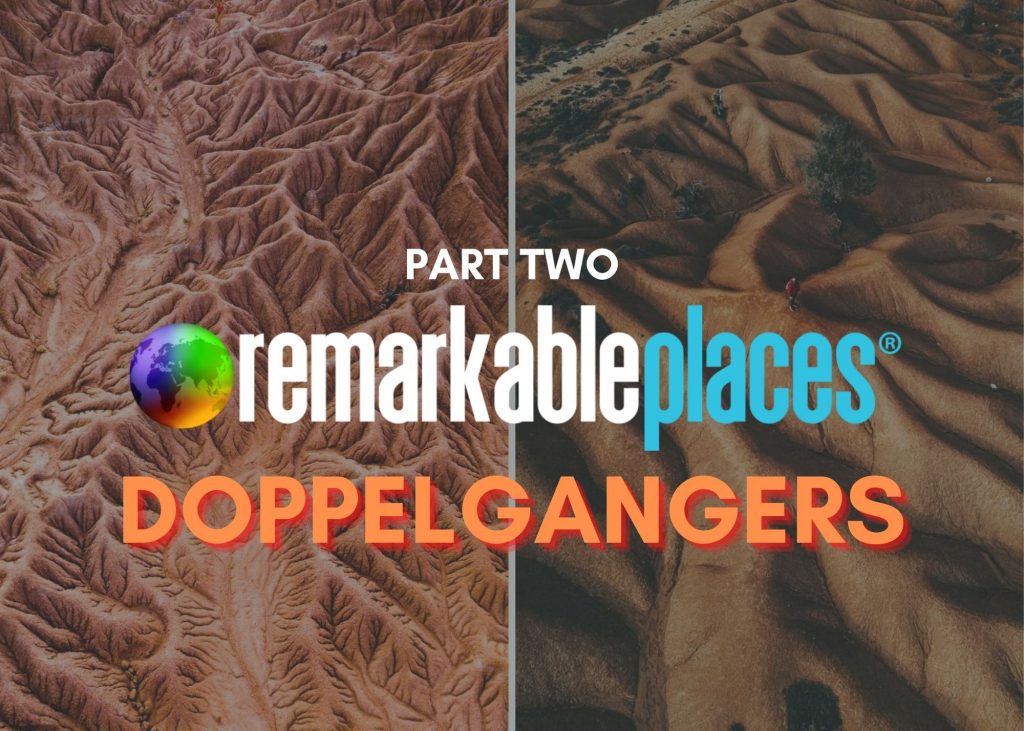 During your travels, have you ever noticed that the place you’re visiting looks surprisingly familiar to something you’ve already seen before? Whether it’s the color of the ocean, the shape of the mountains, or the architecture of the buildings, many of the world’s most notable landmarks might have a doppelgänger somewhere in another country!

Although we believe that every landscape is unique and beautiful in its own way, the following Remarkable Places will have you doing a double-take.

Despite being located thousands of miles away across the South Atlantic Ocean, these two doppelgänger landmarks look surprisingly identical. While the Cerros de Mavecure in Colombia is considerably smaller than the Idanre Hills in Nigeria (250 meters vs. 915 meters), both stone structures are breathtaking to visit (or climb!).

Read our post on all of the Remarkable Places in Colombia!

As some of the earth’s most fascinating natural wonders, blue holes offer a rare glimpse into the unknown underwater world of the ocean. The Blue Hole in the Great Barrier Reef in Australia and the Great Blue Hole in Belize are both natural sinkholes that are home to rare and unique corals and marine creatures. The biggest difference between the two is size – the one in Australia is just 100-feet deep while Belize’s Blue Whole is nearly 500. 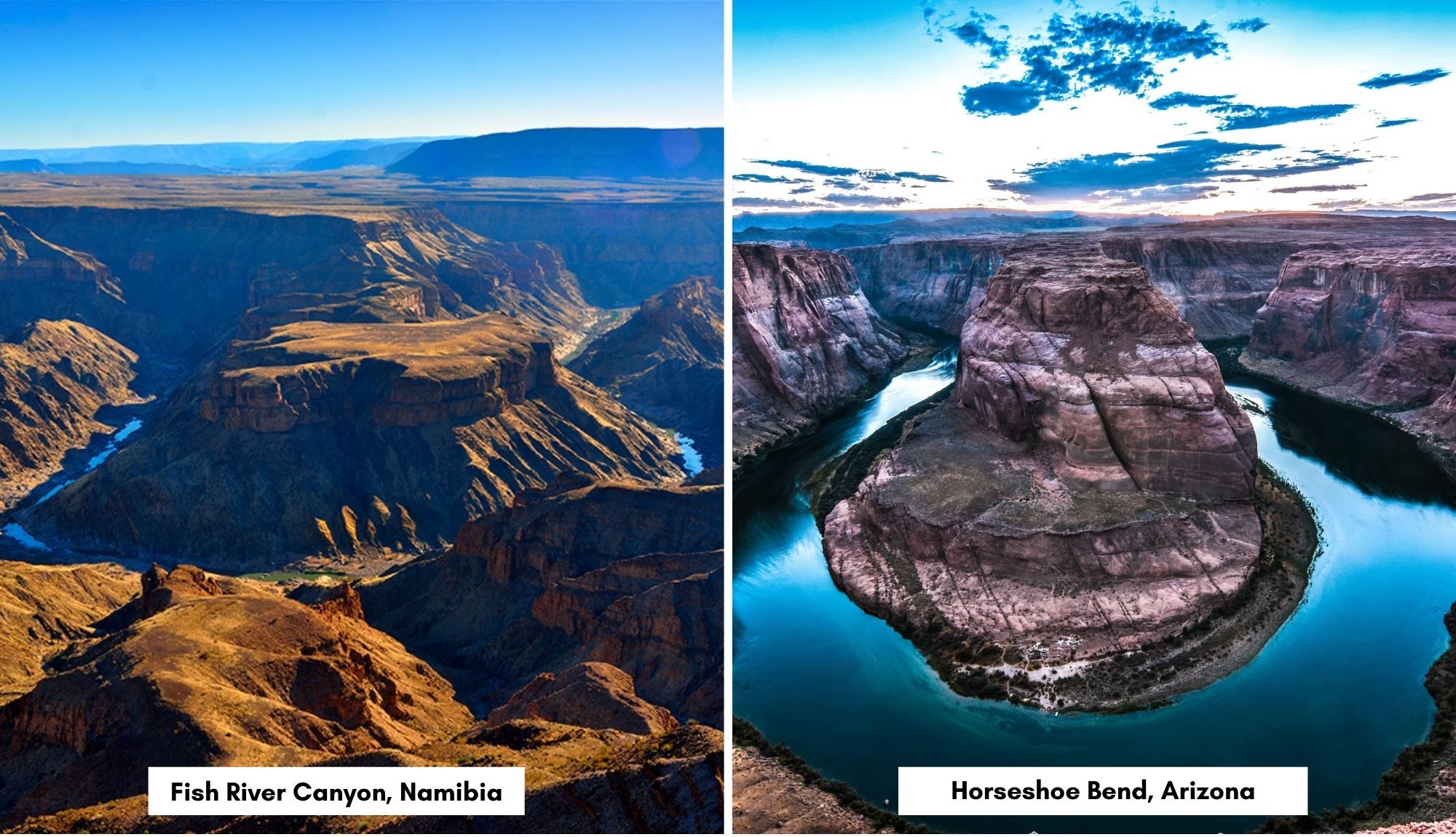 Horseshoe Bend may be one of the most iconic landscapes in the United States, but it actually has several doppelgängers located around the world, including the Fish River Canyon in Namibia! However, the difference in depths between the two is considerably noticeable – Horshoe Bend is 1,000 feet deep while Fish River Canyon is nearly 2,000!

Both of these iconic viewpoints have lush green valleys and flowing rivers, making them two of the most similar doppelgänger places we’ve seen! Arkansas’ Horseshoe Bend (not to be confused with the Horseshoe Bend in Arizona) is almost a mirror image of the Pavlova Strana viewpoint on Lake Skadar in Montenegro. And while the one in Arkansas requires a short hike, the viewpoint in Montenegro can be easily reached by car. 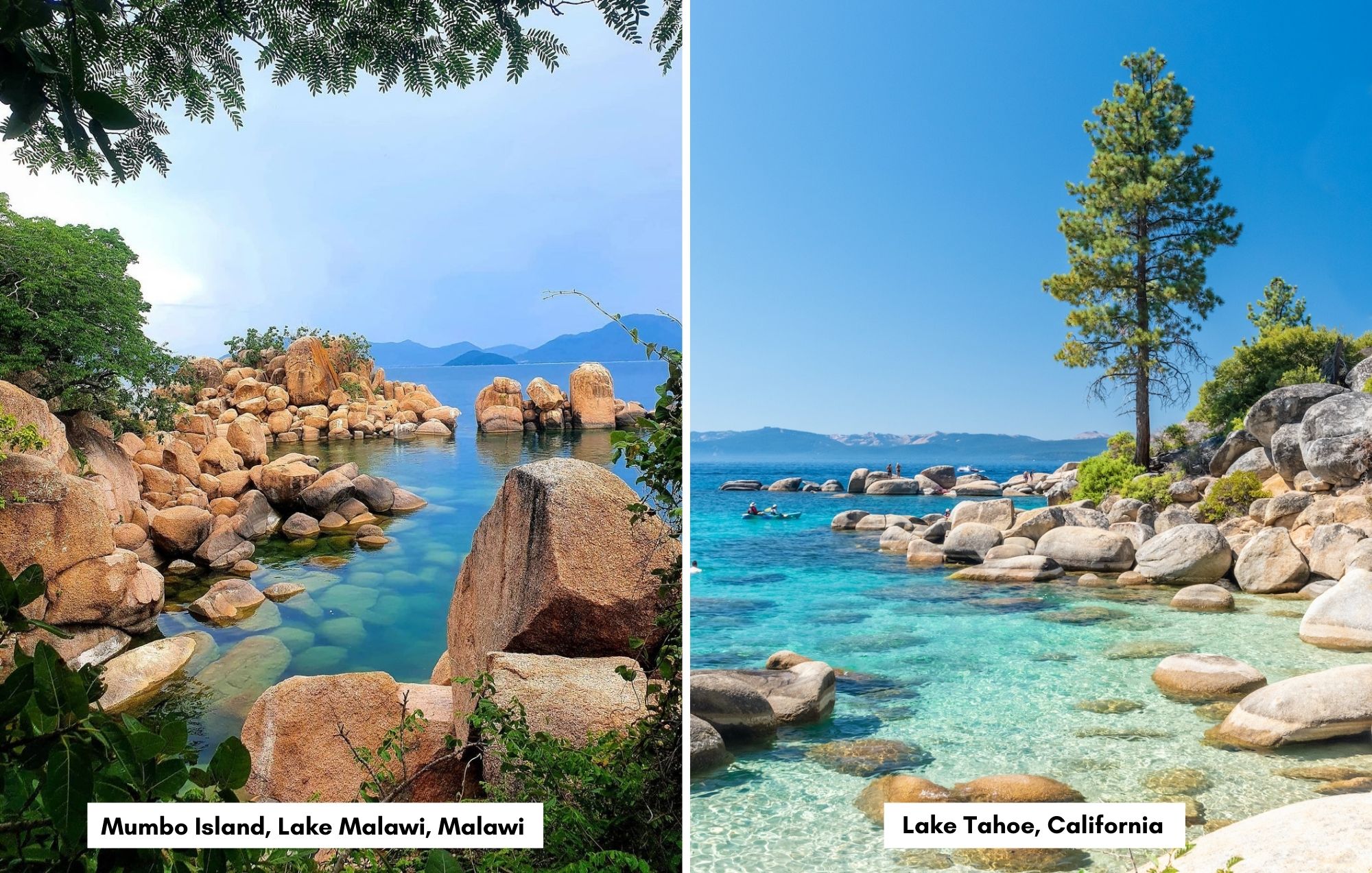 Two of the world’s largest freshwater lakes are eerily similar once you get over the fact that they’re located on two separate continents! Malawi Lake in Africa has massive stone boulders and crystalline blue waters, just like Lake Tahoe in California. Both lakes are popular for watersports, including boating and swimming (although fishing in Lake Malawi is the best in the world since the waters are home to over 1,000 species of fish!)

From afar, the travertine rock formations of Hammam el Meskhoutine in Algeria and Hierve el Agua in Mexico look like waterfalls that have been frozen in time. However, they’re actually calcium carbonate limestone deposits from hot springs that have hardened and created this unique “flowing” appearance. The bubbling springs are rich in minerals and believed to have healing properties. 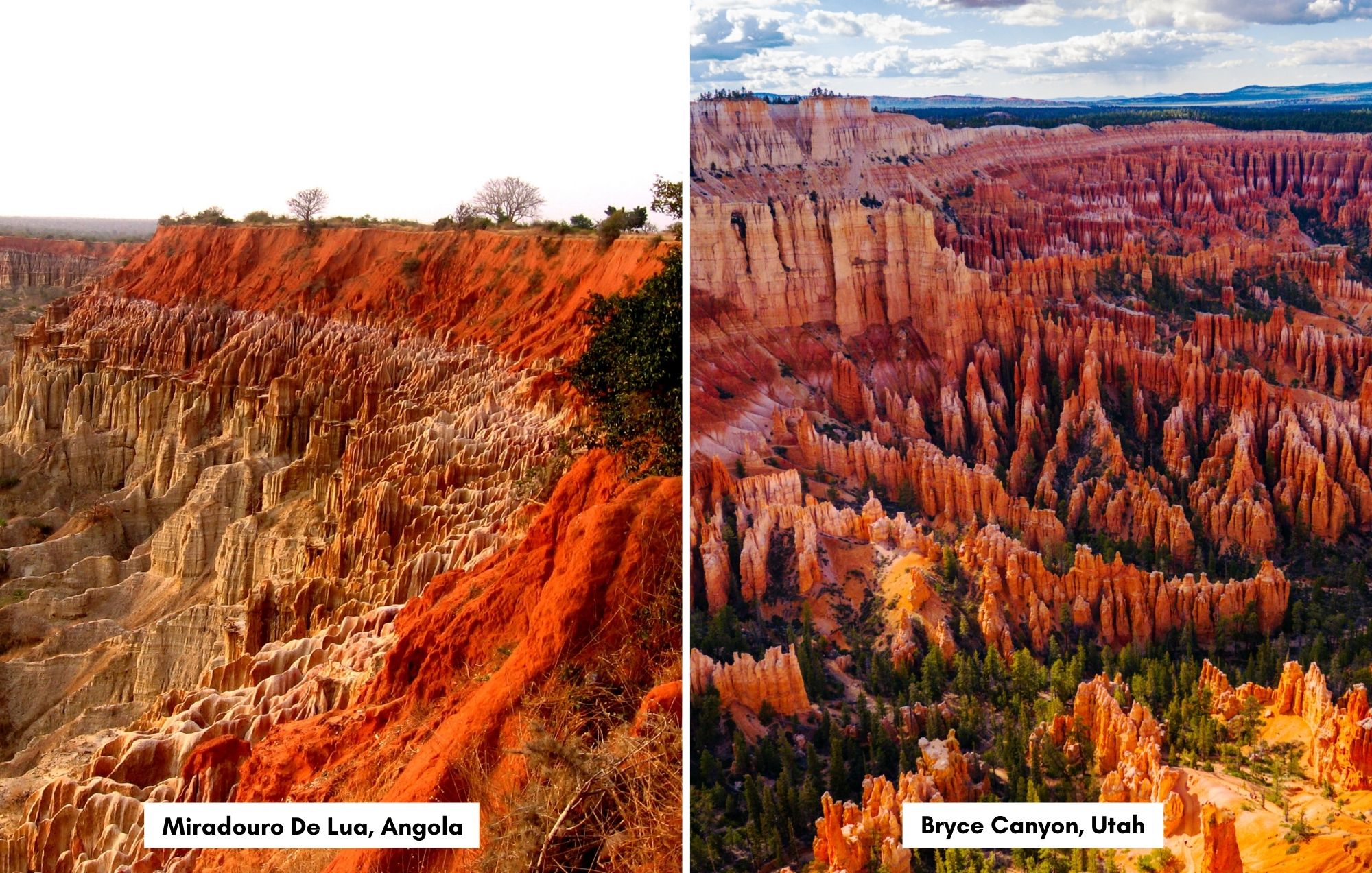 Famed for their towering rock pinnacles and lunar red landscapes, these two Remarkable Places are the result of millions of years of erosion. The main difference is their location. While the spire-shaped formations in Bryce Canyo are tucked away inside a National Park, the steep rocky valley of the Miradouro de Lua is perched along the coast of the Atlantic Ocean in Angola in Africa.

The swirls of blues, turquoises, and greens make both the Whitsundays and La Paz some of the most fascinating landscapes on Earth. But, while Australia’s waters are teeming with vibrant colors and tropical fish, Mexico’s beach is known for being calm and shallow – so much in fact that you can walk from one side of the bay to the other!

While Manhattan and Athens may be worlds apart, these two metropolitan cities do have one thing in common. The urban greenspaces of Nea Filadelfeia and Central Park provide bustling city-goers a chance to escape the skyscrapers and high rises and to relax in the tree-lined parks of these inner-city oases. 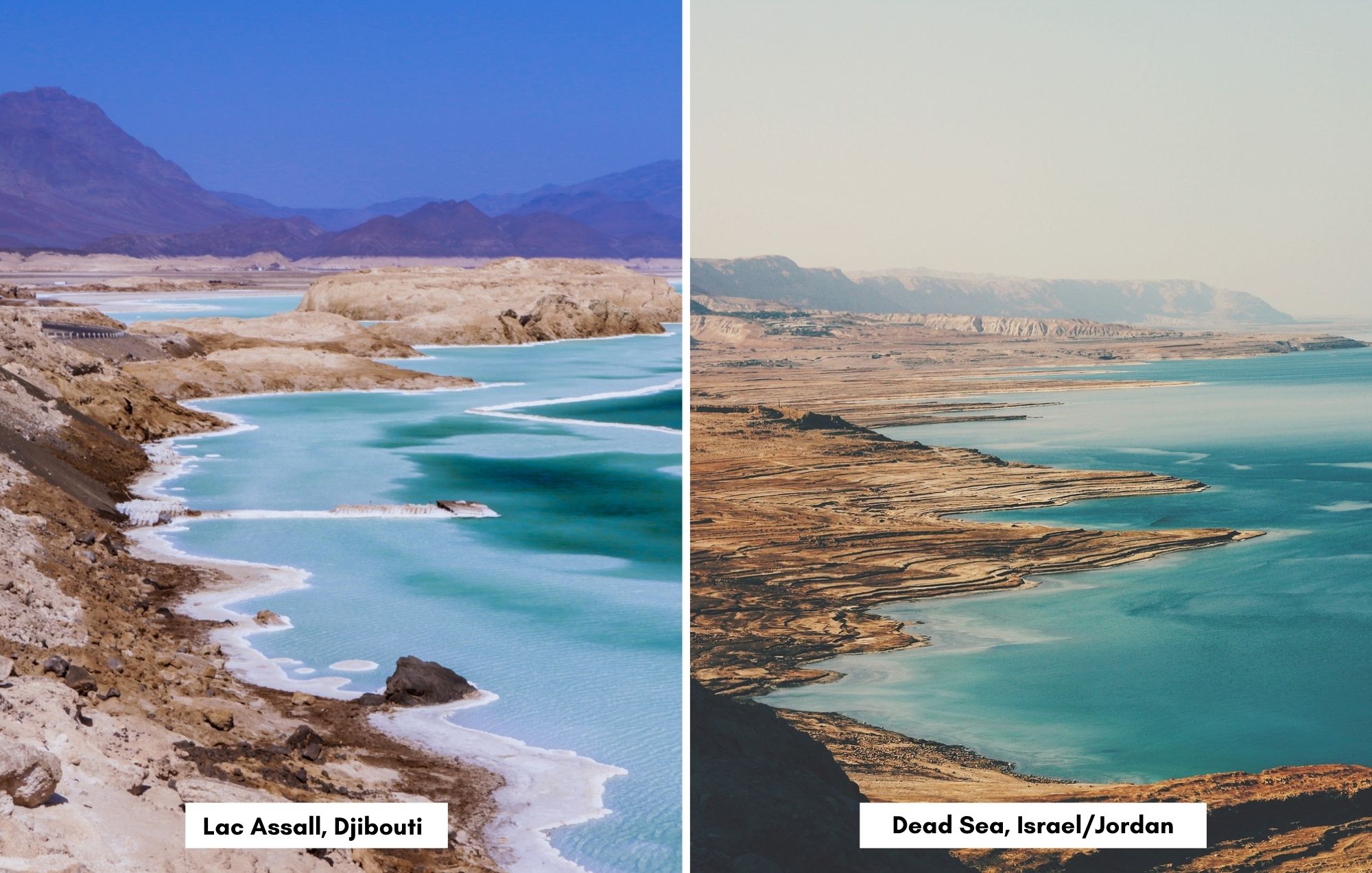 Despite what you may think, the Dead Sea is not the most saline lake in the world (although that doesn’t make it any less gorgeous!). Lake Assal in Djibouti is 1% saltier than the Dead Sea (it’s made up of 34.8% vs. 33.7% in the Dead Sea), however, both places are ideal for floating in the buoyant waters.

Europe is home to some pretty spectacular old-world cities, and Cesky Krumlov in the Czech Republic and Bern in Switzerland are no exceptions. While both areas have been predominately inhabited for thousands of years, it’s the jaw-dropping architecture that makes these two cities so utterly beautiful. Don’t miss relaxing on the banks of the Vltava River (Cesky Krumlov) or going for a swim in the Aare River (Bern).

Bright pink lakes are definitely some of the most remarkable places in the world! The waters of Lake Lemuria in Ukraine and Laguna Colorada in Bolivia are both vivid shades of pink, colored by the presence of algae and salt crystals. The only difference is that Lake Lemuria is great for soaking (and even known for its healing properties), while Laguna Colorada is far too muddy to swim.

While most beaches are known for their blue waters and powdery soft sands, these two Remarkable Places have something else in common! Elephant Rocks in Australia and Tanjung Tinggi in Indonesia are dotted with massive stone boulders, making both these spots a picturesque destination for your beach holiday. 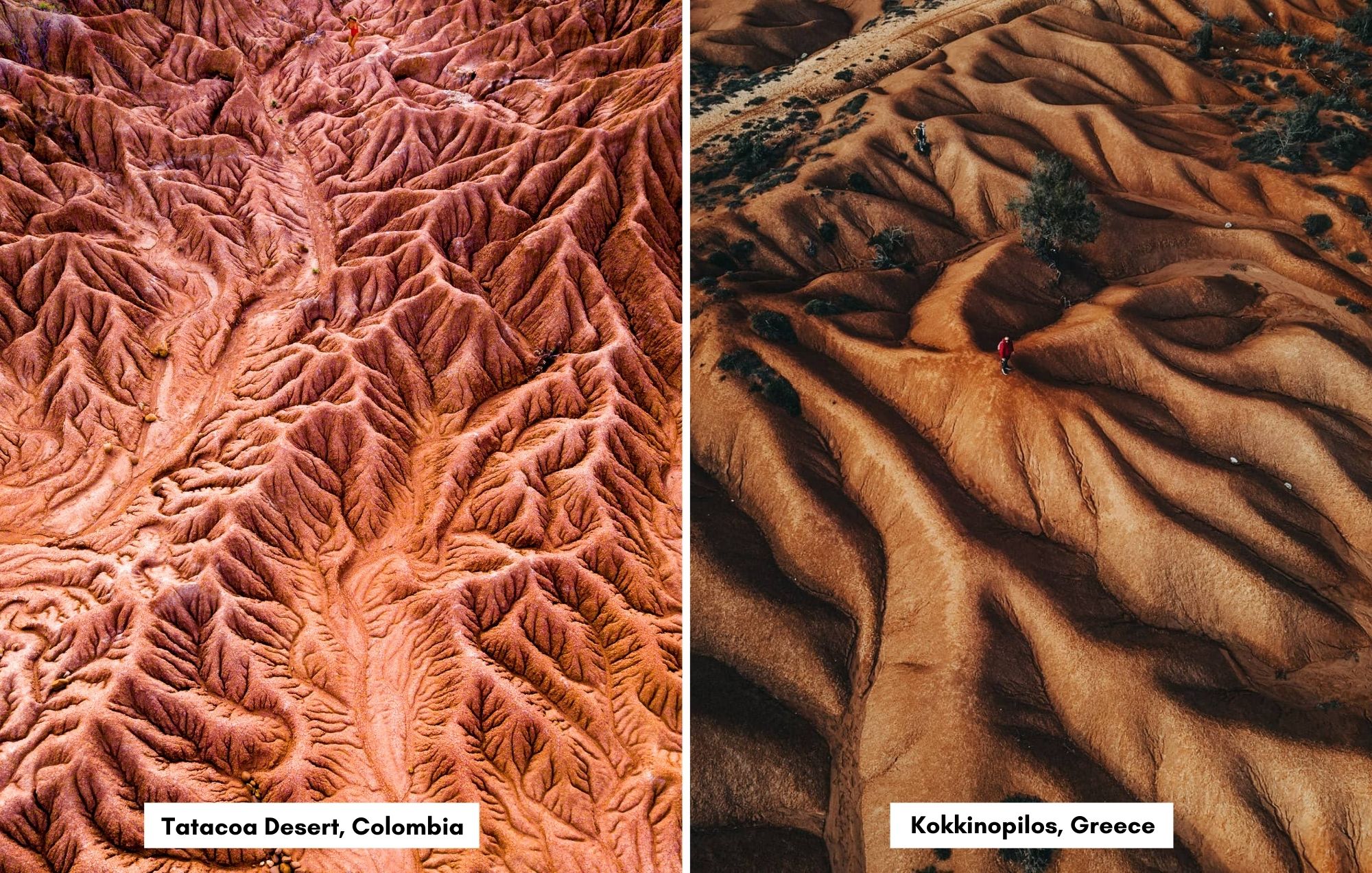 While the barren landscape of the Tatacoa Desert in Colombia may look quite similar to the village of Kokkinopilos in Greece, both sites couldn’t be more different. The Tatacoa Desert is actually a tropical dry forest (and not a desert like its name implies) where you can hike and stargaze. On the other hand, Kokkinopilos is an archeological site with fossils and historical artifacts that date back more than 100,000 years.

Read our post on all of the Remarkable Places in Colombia!

The contrasting colors of royal blue and green jade make the waters of the Enchanted River and Izvor Cetina an inviting destination to go swimming. While both of these doppelgänger places are actually rivers, it’s their karst springs that are the most noteworthy features. With waters this clear, you’ll almost be able to see all the way down to the bottom!

Unlike other beaches around the world, Sarakiniko in Greece and Governors in Cyprus have one unique feature that sets them apart from the rest. Instead of swaying palm trees and golden sand, these two Remarkable Places are known for their pure white cliffs! Because of these rock formations, you’ll feel as if you’re sunbathing on a completely different planet!

Read our post on all of the Remarkable Places in Greece!

Looking for more identical doppelgänger places? If so, check out the first part of the doppelgänger series here. And if you can think of other Remarkable Places we may have missed, please let us know on Instagram! 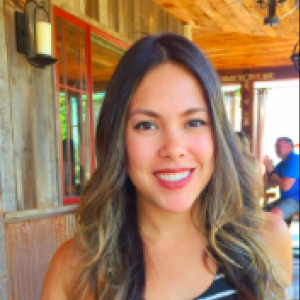 Tara is the Lead Blog & Content Writer for Remarkable Places. She's currently based out of Munich, although she has also lived in Beijing, Rome, Porto, and of course, her hometown of Seattle, WA.
PrevPrevious
Instagram Facebook-f Pinterest
RELATED POSTS 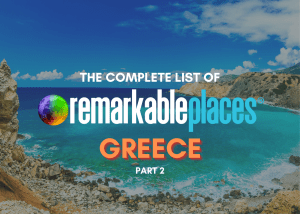 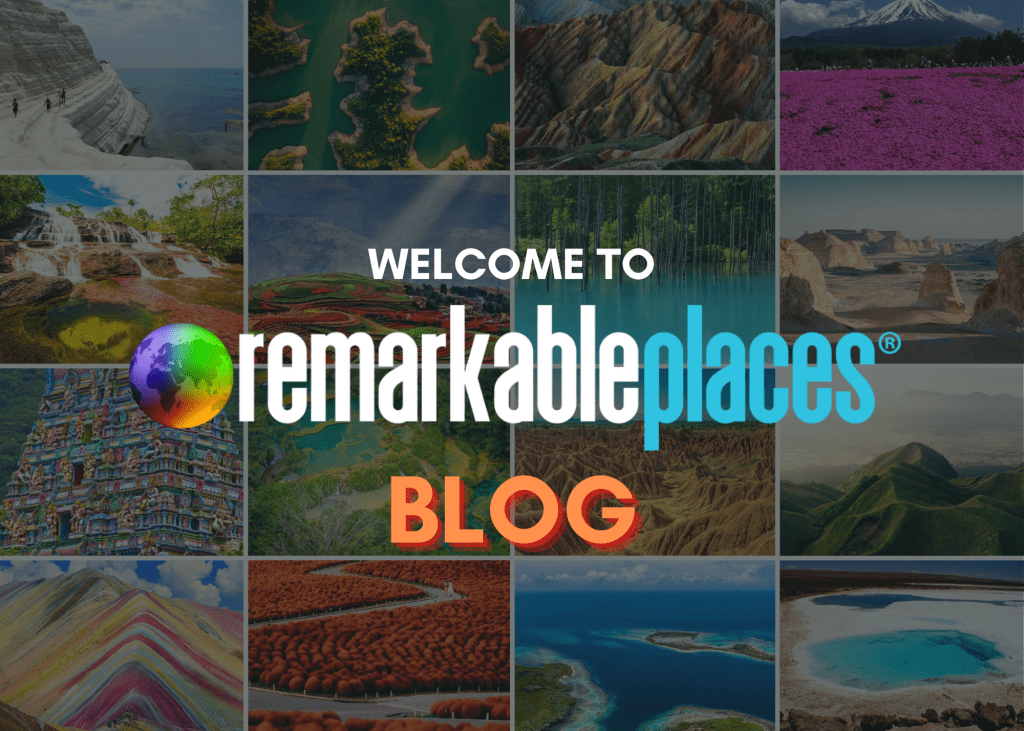